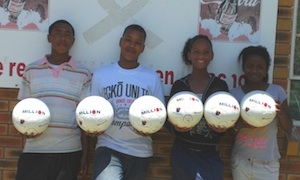 Teenagers at a school where the Future Factory runs sports programmes. The soccer balls were bought with a donation from CHW.

The Future Factory runs structured sports programmes in over fifty schools in the Western Cape. It also runs feeding schemes, and supports other feeding programmes run by different local organisations and helps to support schools and creches.

The Future Factory was started by Anne Siroky, who was South Africa’s number one volleyball player in 2000. After retiring, she decided to share her volleyball skills with schoolchildren, but realised that there were no sports programmes operating in the local schools, and started the Future Factory.

The Future Factory has become involved with a food distribution programme, assisting people from disadvantaged communities across Cape Town. The lockdown has caused an increase in poverty levels. Food is prepared and distributed each day. The food is prepared in big pots. It costs around £52 for the ingredients to prepare food for 400 people, so just £13 will give a meal to 100 people. To support this food programme, it is possible to make a donation here. 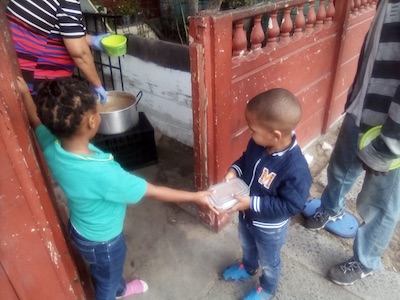 Food being given to children

We held a coin collection to raise money to buy soccer balls for The Future Factory’s sports programmes, so that more children could take part. Thank you to everyone who collected their coins for this collection! We also provided funds for an event for children with disabilities, in a township called Mitchell’s Plain, as well as supporting a “cookie bucket” challenge, to help support sports programmes for the children and teenagers. CHW’s saddest appeal in the history of the charity was for the Future Factory, when we fundraised for the funeral of Lisle, a little girl supported by the Future Factory. She had suffered an extreme abusive incident when she was seven. She had been making progress ever since, but devastatingly, when she was eleven years old, she was killed in an accident involving the bus she was travelling in, to go to school. Her family did not have the money for her funeral, so we provided funding for this. More about this tragic incident is here.