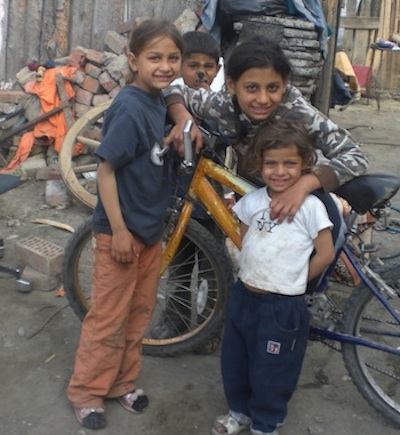 Children in one of the villages where FAST works.

FAST stands for “Fundatia pentru Asistenta Sociala si Tineret,” which means the “Foundation for Social Assistance and Youth.” FAST runs a range of projects improving the lives of children and families in the marginalised Roma communities, around the area of Sacele. The organisation was started in 1998 by Daniel and Ema Hristea, an inspirational couple, who felt it was their calling to help the disadvantaged and needy children in their country.

FAST’s projects include building better homes for families, running educational programmes, as well as a music school, and much more! We want to contribute towards these projects. As well as making donations, it is also possible to volunteer with FAST.

So far, CHW has helped one family in particular, out of the many which FAST supports. This family has eleven children, and has been living in abject poverty in the Roma village of Tarlungeni. The photo above shows four of the eleven siblings. Their father, Sorin, desperately wanted to work to support his children, but communities like his are often cut off from the local economy. FAST asked us for two thousand five hundred pounds to build a carpentry workshop, so that Sorin could work and start a family business, to lift his children out of poverty. The children could join the business when they are grown up, so they could then provide for themselves and break the cycle of poverty. CHW completed the fundraising for this back in 2011. Everything went well with building the workshop and buying equipment for it. Then, Sorin was shockingly diagnosed with cancer in the summer of 2012 and passed away in January 2013. His oldest son, Lucian, who is still a teenager, has had to support his ten younger siblings since then. FAST asked us to fundraise for an apprenticeship for him, which we did. Lucian should be able to use the carpentry workshop in the future, to help bring in an income for the family. One of our patrons, Ottilia, has been making regular contributions to help the family with their basic needs, such as food and washing powder.

FAST also asked us to fund a tutoring and mentoring scheme for the ten younger siblings. We did this for a trial period of four months. Robert, a social worker has been supporting the children and tutoring them. The programme has been a great success and FAST has asked us for the funds to continue the scheme. We have managed to raise the funds for the scheme to run until the end of September 2015, and we want to be able to support it further. It costs two hundred pounds per month, and we are looking for people to sponsor either a whole month (two hundred pounds) or half a month (one hundred pounds). It would be great if we could at least raise the funds to cover  at least until the end of December 2015. Please get in touch with Catherine, at catherine@chworldwide.org if you can help.

A big, big thank you to everyone who has supported the children in this family so far. You have been a huge help at this very difficult time in their lives. 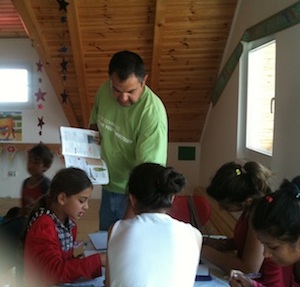 Some of the children at a tutoring session.
Thanks to Daniel from FAST for sending us this photo. 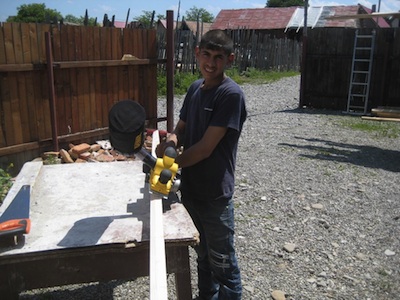 Lucian, the oldest child. We have funded an apprenticeship for him.
Thanks to Daniel from FAST for sending us this photo.