Our past projects in 2010 include:

> Repairing Computers at an Educational Project in Romania

> Funeral Costs for a Child in South Africa

> Distribution of Toys in Romania, South Africa and Ghana

> Distribution of Educational Items and Donation for a School in Argentina

> Distribution of Clothes, Toys and Recorders to Three Organisations in Romania

> Providing Food for a Creche in South Africa

> Donation for an Educational Project in Romania

> Building a Classroom for a School in Ghana

> Donation for Food and Contribution towards Teachers’ Salaries in Ghana

New Life International Children’s Home in Ghana now has new benches and tables and an extended area for the children to eat! Many thanks to Agnieszka Perkins and Mark Cochrane for holding a fundraiser at their work, and to Emma Hughes who had a fundraiser at the School of Human and Health Sciences at Swansea University, where she was working. Many thanks to our Patron Ottilia Saxl who gave a donation, which meant we had the amount we needed for this project. Thanks to the director of the children’s home, Derrick Fletcher-Gaisie, for sending us the photos. 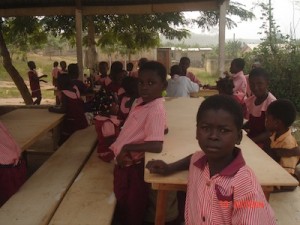 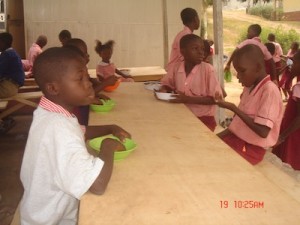 Repairing Computers at an Educational Project in Romania

We were happy to be able to send a donation to the Atelier Sacelean Association, so they could have their computers repaired. This organisation runs an education centre to enable underprivileged children in the area of Sacele, near Brasov, to learn new skills and get help with school work. 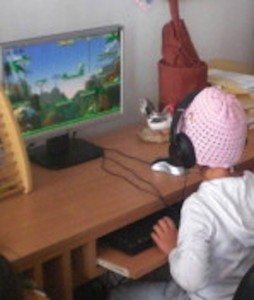 A girl using one of the computers at the educational centre

This organisation runs a school and an orphanage in the village of Eguafo, in Ghana. Over the past couple of years, we have had some small regular donations to give to Sankofa and we hope to be able to continue to give more, to help Sankofa provide food for the children. Thank you to those who have been supporting Sankofa. 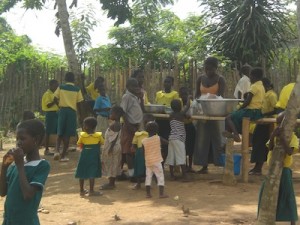 The children getting some food during breaktime.

Funeral Costs for a Child in South Africa

This was the saddest appeal CHW has ever held. The funeral was for Lisle Augis, aged 11, who was a child supported by an organisation we work with in South Africa, The Future Factory. Lisle was an amazing little girl, who had been so through so much in her short life. At 7 years old, she suffered an abusive incident at the hands of her father’s best friend, and was then set alight and left to die. She actually survived and the director of the Future Factory, Anne Siroky, had been helping to support her progress ever since. However, due to reckless driving, the minibus she took to school crashed into a train in 2010. She was among the ten children who died as a result. The family lives in poverty and could not afford a funeral. Thank you so much to everyone who donated. The funeral took place, and the family, including Lisle’s little brother, Jessie, was able to say goodbye to their beautiful girl. 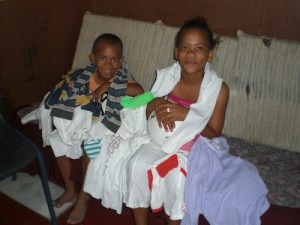 Lisle, with her little brother, Jessie. The clothes and soccer ball were donated by CHW. Our partner organisation in South Africa, the Future Factory, continues to support Jessie

Thanks to Benyam Mezmur, who found out about the funeral through CHW’s director, Catherine, for letting his colleagues at the University of the Western Cape and the Community Law Centre know that the Future Factory needed funds to pay for the funeral and for organising a collection. Thanks to everyone who gave. As Benyam was in Cape Town, he was able to give the contribution directly to the Future Factory.

Distribution of Toys in Romania, South Africa and Ghana

Marie-Lise Despeghel received a donation of soft toys on behalf of CHW from John Lias. The toys went to children at Casa Mea in Romania, New Life International Children’s Home in Ghana and Seawind Educare in South Africa! Volunteers can take things to the children when they visit projects. CHW’s director Catherine was able to take the toys to Romania and South Africa, and one of CHW’s trustees, Emma Hughes, took the rest with her on her visit to Ghana. 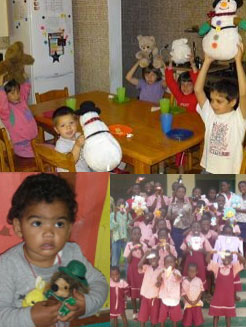 Children in Romania, South Africa and Ghana enjoy playing with the toys!

Distribution of Educational Items and Donation for a School in Argentina

We were able to distribute donated educational items to Floerntino Ameghino school in Argentina. Thanks to Jana Liebau and Marie-Lise Despeghel for organising collections of these items and to Des Poon Wai Wam for the colouring sheets from McDonalds.

At the same time, we were also able to give a financial contribution, which bought globes and maps for geography lessons and a flag for the children to celebrate the Day of the National Flag! 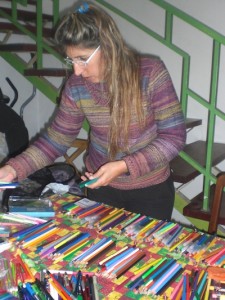 Cecilia, a teacher at the school, sorting through the donated pencils, to give some to every class. 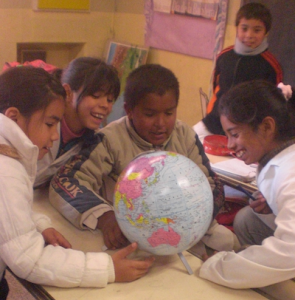 Children looking at the globe.

Distribution of Clothes, Toys and Recorders to Three Organisations in Romania

Many thanks to everyone who donated items for the children we work with in Romania. CHW’s director, Catherine, was able to distribute the items on her trip there.

A donation of clothes was given to the Atelier Sacelean Association and to FAST. These clothes were then distributed to children from Roma families who are living in extreme poverty. Thanks to everyone who donated children’s and babies’ clothing.

FAST also runs a music project for children from the Roma communities. Thanks to Anne Nadel and Michelle Masters for donating recorders for this project.

Marie-Lise Despeghel was given a donation of toys and some of these were given to the children’s home, Casa Mea. 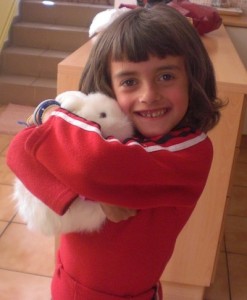 Cristina at Casa Mea with her new toy rabbit.
Thank you to all who donated items. The children were delighted!

We were able to give a donation of one thousand two hundred and fifty pounds to the children’s home, Casa Mea, in Romania, which helped them to pay the salary of a carer to work with the children there for a year. We hope to raise funds for the salary again next year. The carer, who was a street child herself, can really understand the children’s needs. The children all come from difficult backgrounds and it is essential that there is the staff to be able to work with them.

We were able to give this donation with the help of the following people: our patron, Steve Parkinson, who held a fundraiser in the UK; Jana Liebau who arranged a charity concert in Germany; all of the bag packing volunteers who helped at our fundraiser in the UK; and Marie-Lise Despeghel who made a contribution. 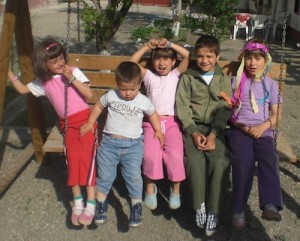 Some of the children at Casa Mea.

Providing Food for Children at a Creche in South Africa

We were able to donate part of the money raised at a bag packing fundraiser in Camden, London, to Seawind Educare in Cape Town, South Africa. The director of the creche, Rita Benjamin, bought food for the children, as can be seen in the photo below. Thanks to all the volunteers who helped at the fundraiser and thanks to Rita for sending us photos of all the food she bought for the children! 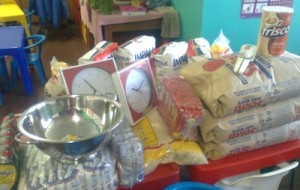 Food for the children at Seawind Educare, Cape Town.

Donation for an Educational Project in Romania

We were able to give a donation to the Atelier Sacelean Association, which runs an education centre for underprivileged children. The donation went towards resources for the centre, including pens, paper, other materials and laminator pouches, so that worksheets can be re-used. 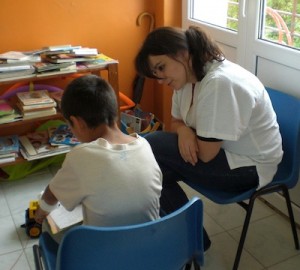 Building a Classroom for a School in Ghana

New Life International Children’s Home runs a school for the children that live there and also for children from the surrounding villages. Building a new classroom, as an extension to the school, means that there is now more space to accommodate the ever-growing number of children attending, allowing them to get a better quality education.

A big thank you to the Marr-Munning Trust, which gave us a grant of one thousand pounds towards building the classroom, to our patron, Steve Parkinson, for holding a fundraiser for the classroom and to all the individuals who gave donations. It is so very much appreciated. The building work was overseen by Derrick Fletcher Gaisie and Jacqueline Hinson, who run the Home. Thanks to Derrick for sending us photos so we could keep you all updated! 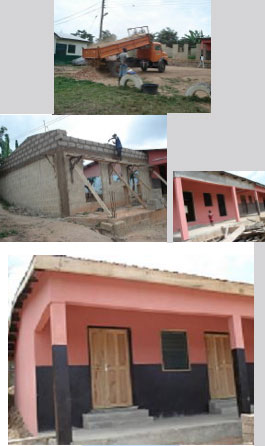 Donation for Food and Contribution towards Teachers’ Salaries in Ghana

We were able to give a donation of three hundred pounds to Sankofa Mbofra Fie in Ghana. This organisation runs a school and an orphanage. The donation went towards buying food for the children at the orphanage and school and also towards helping to pay the salaries of the teachers. It is essential that the children can gain an education.

This donation was raised through fundraising efforts of Ben Siegelman and also through a fundraising dinner held by Louise Lam. We would like to thank the manager of the Dragon City Chinese Restaurant in Alperton, London, for letting Louise hold the fundraiser there. It is greatly appreciated. 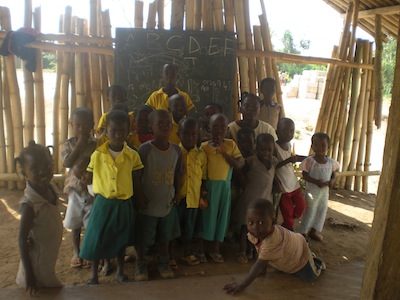 Some of the schoolchildren with their teacher